How To: A Pumphouse 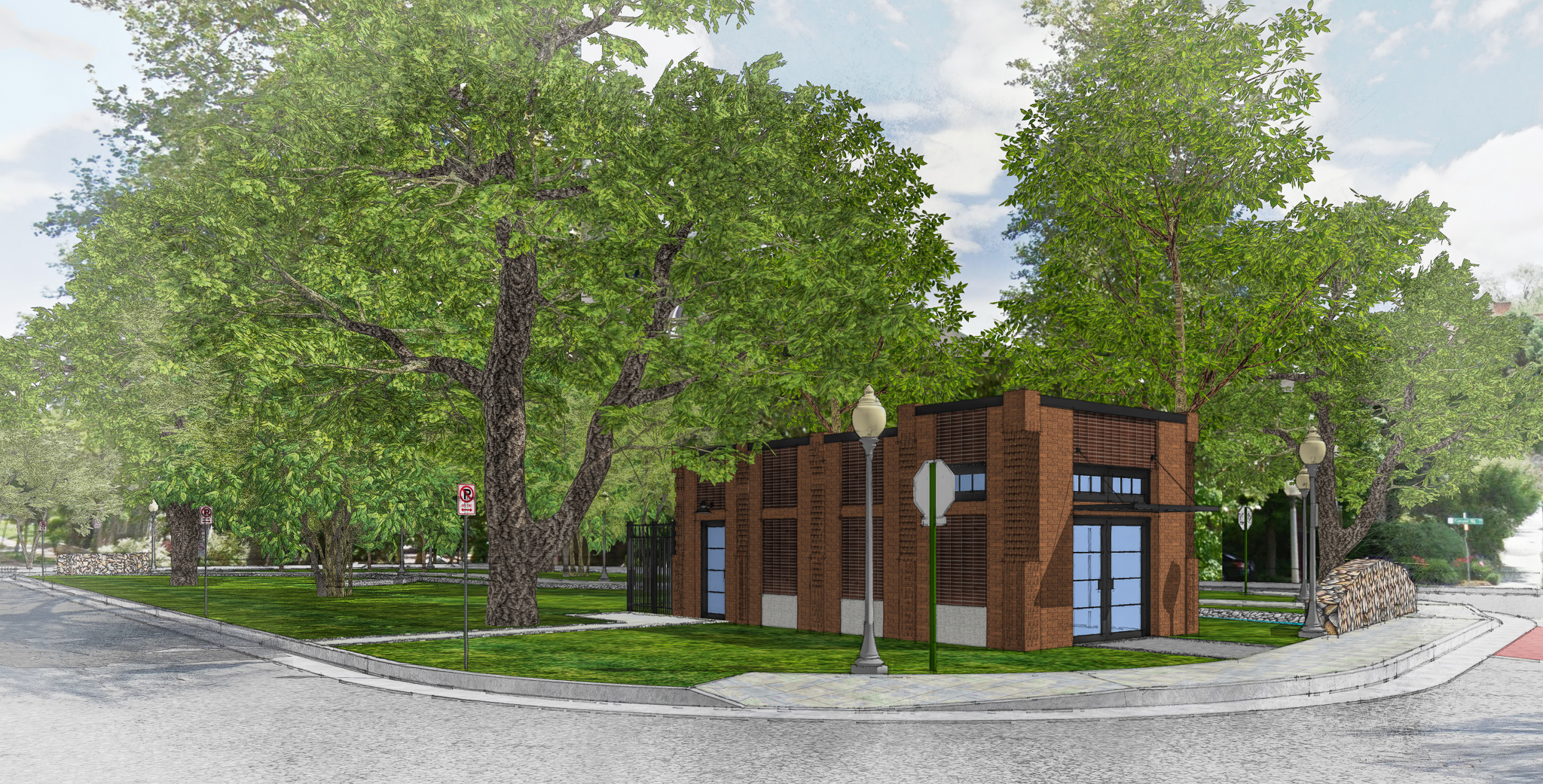 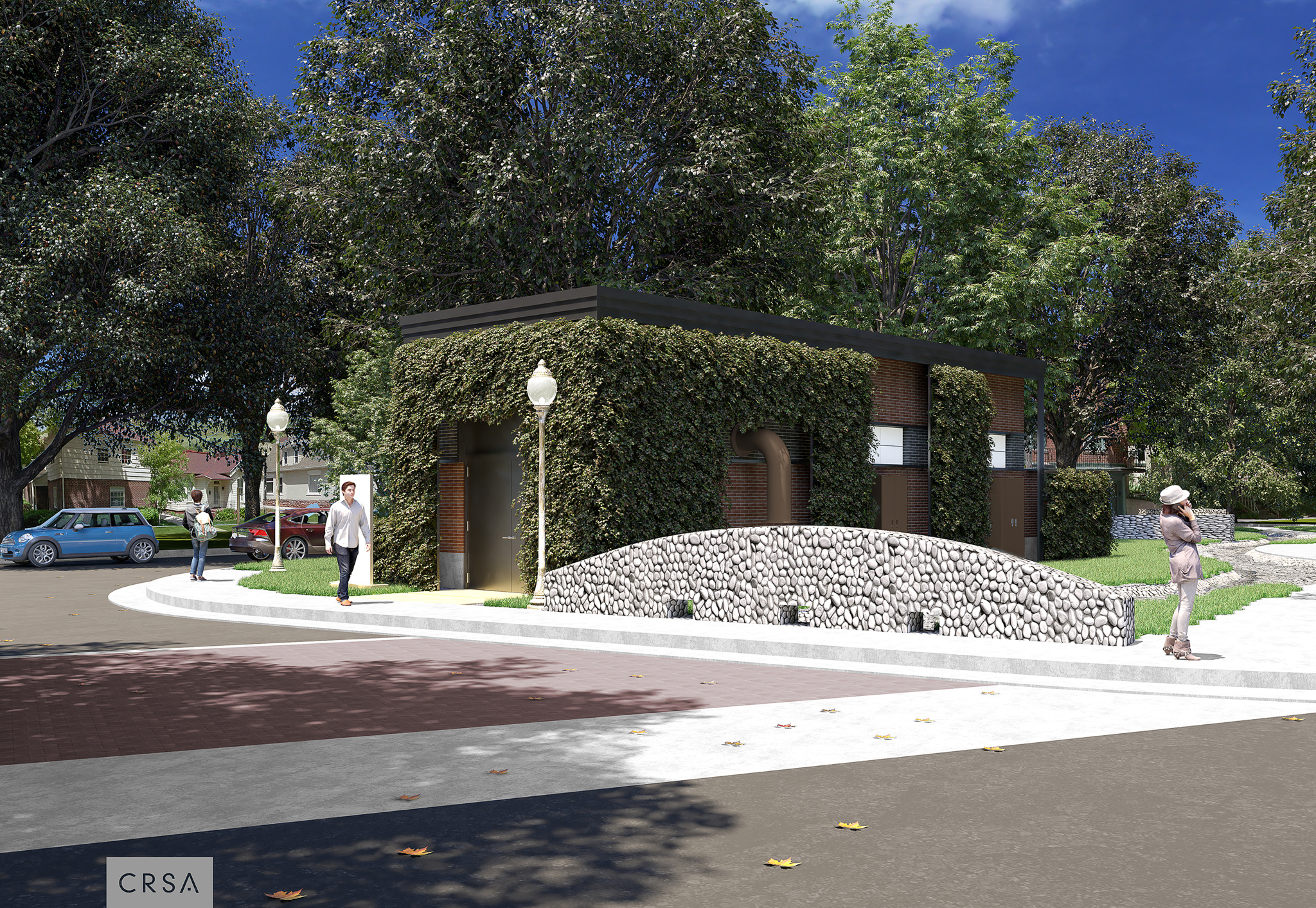 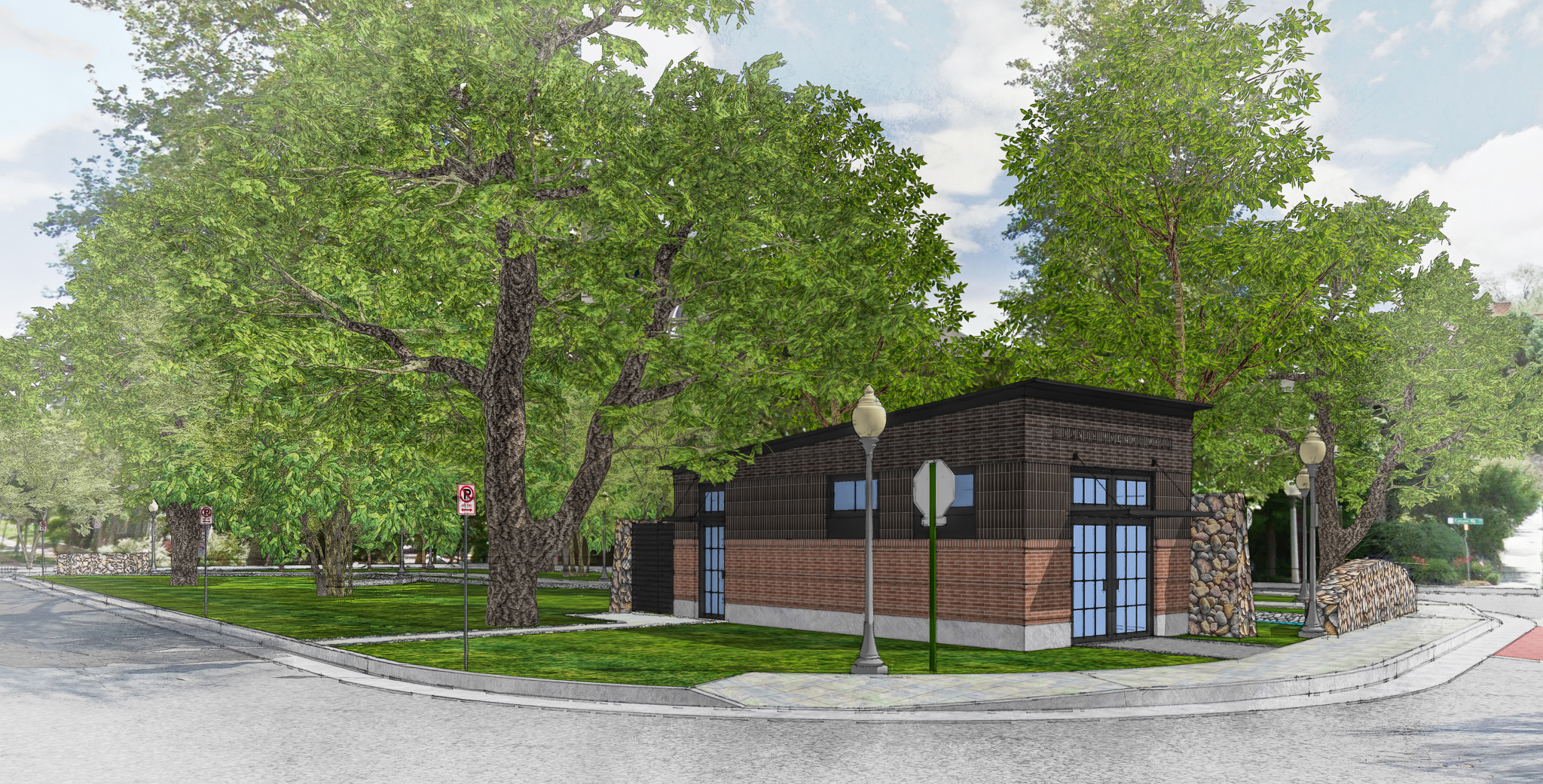 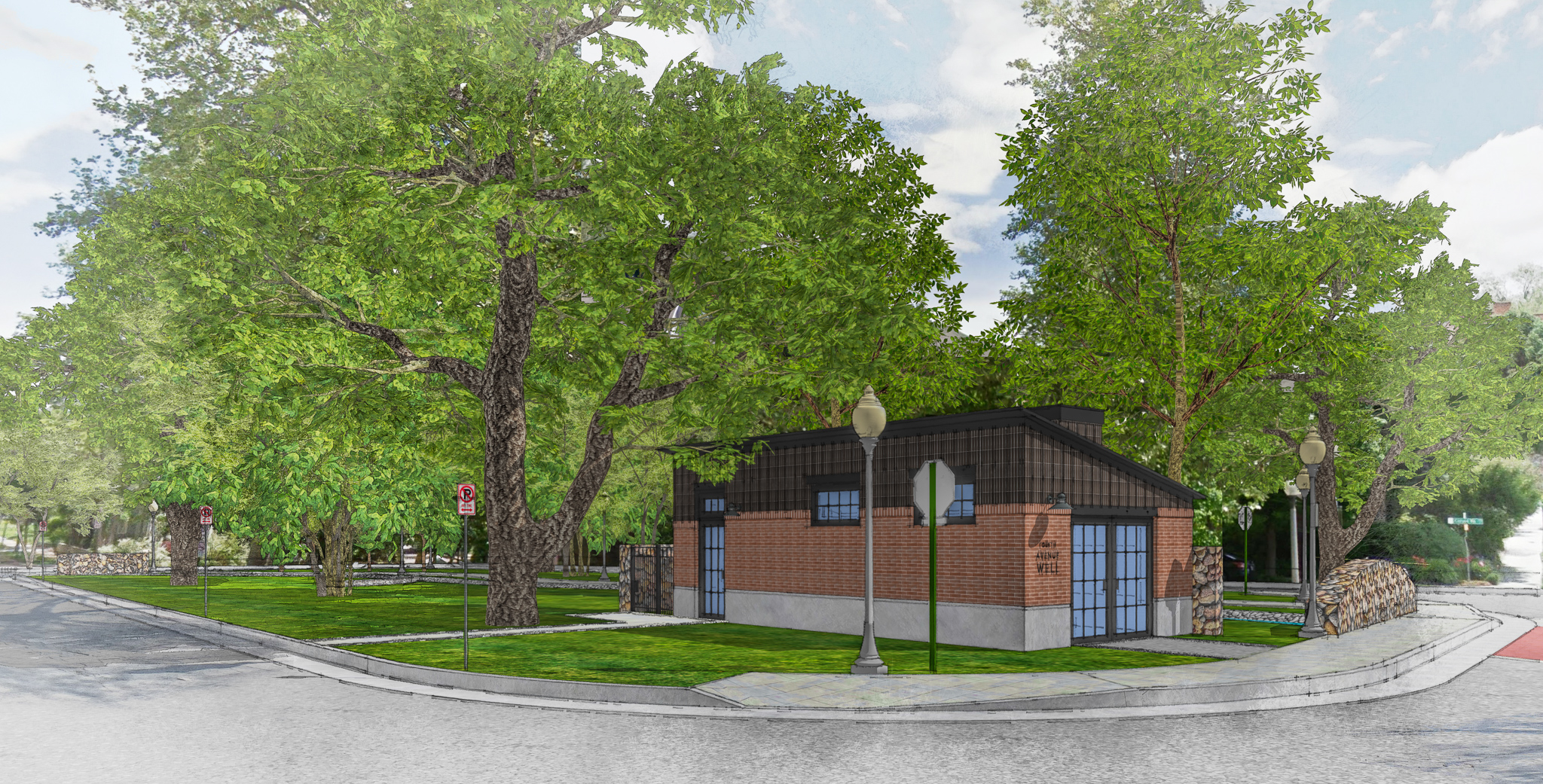 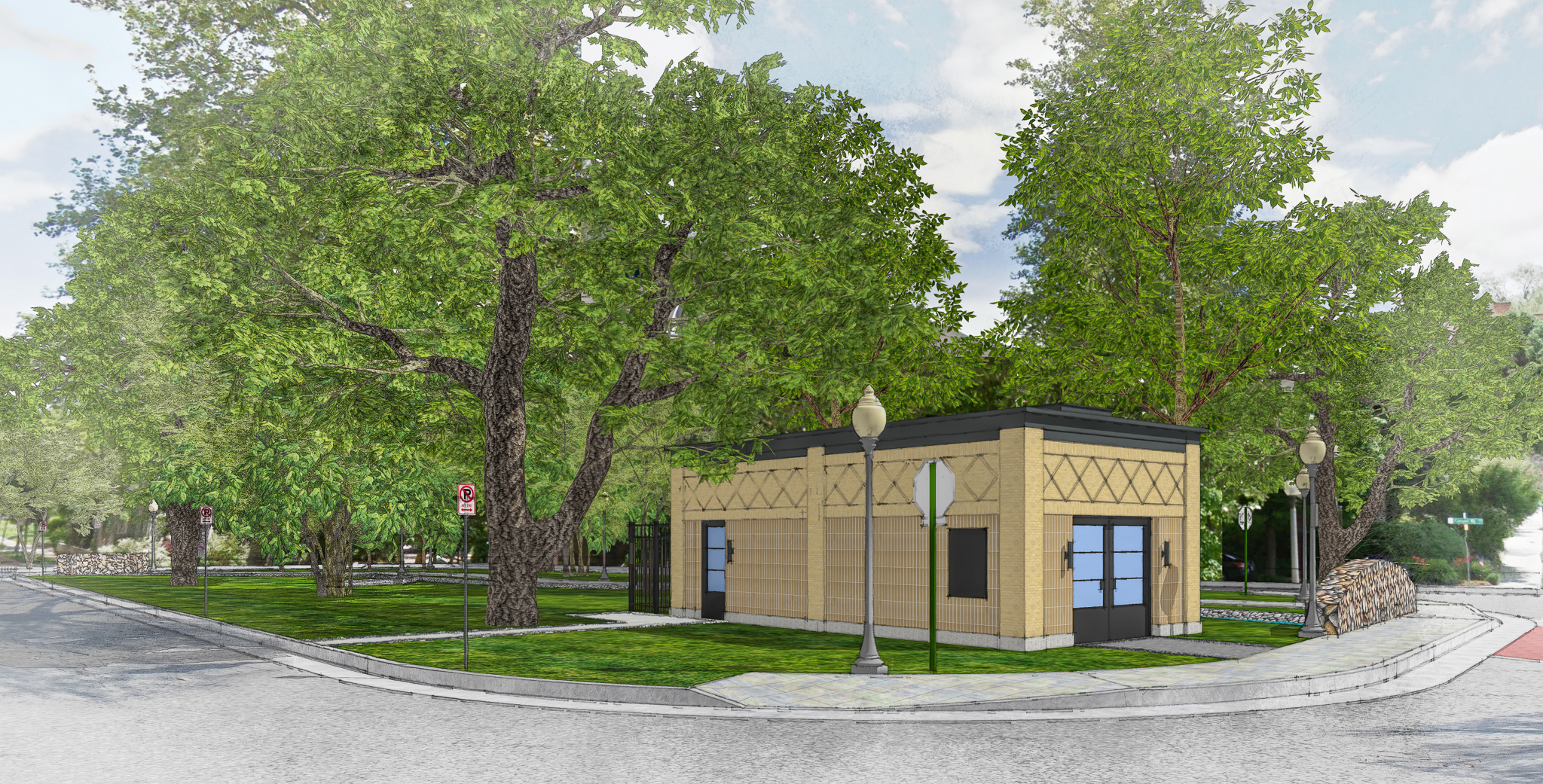 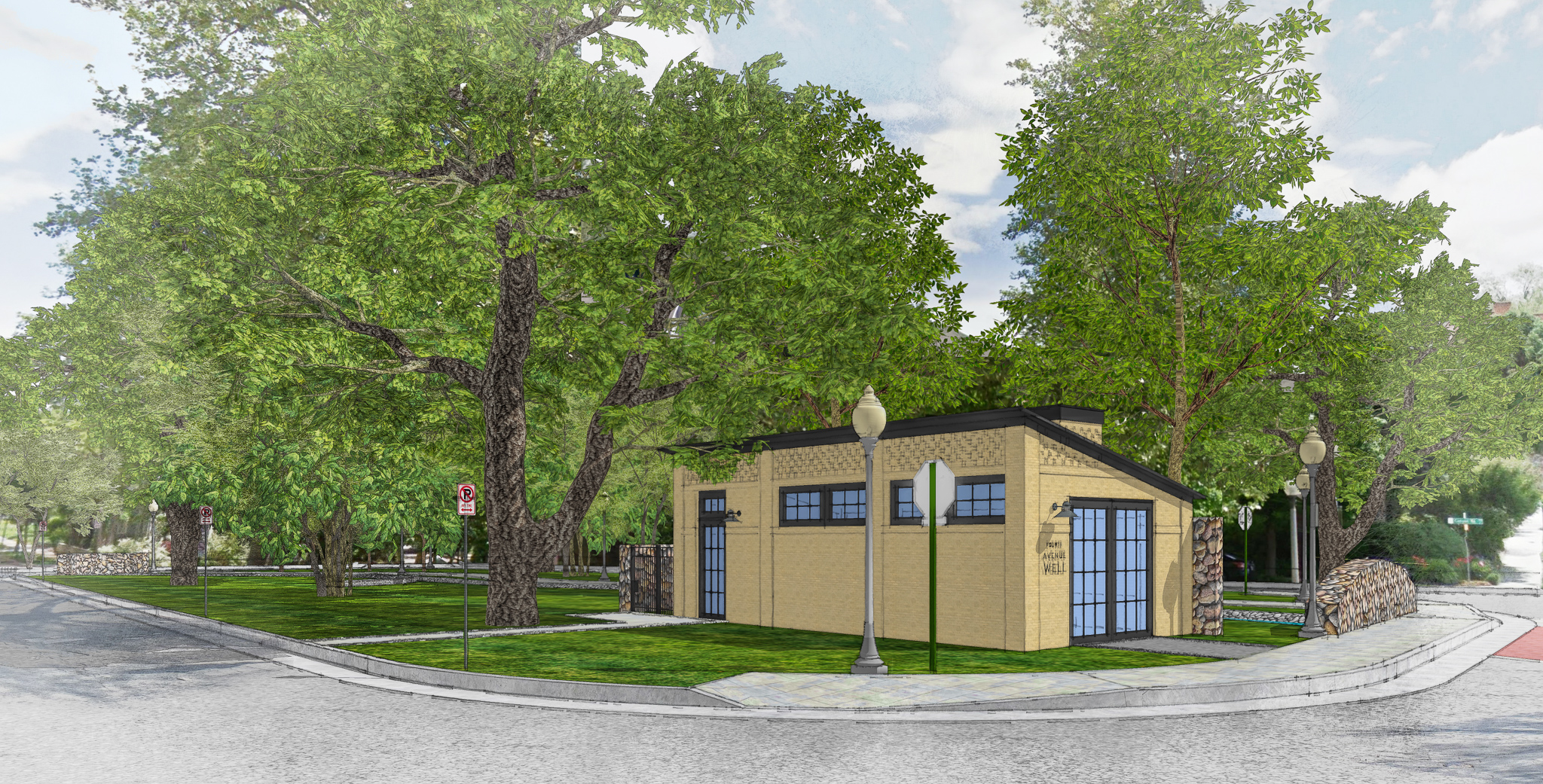 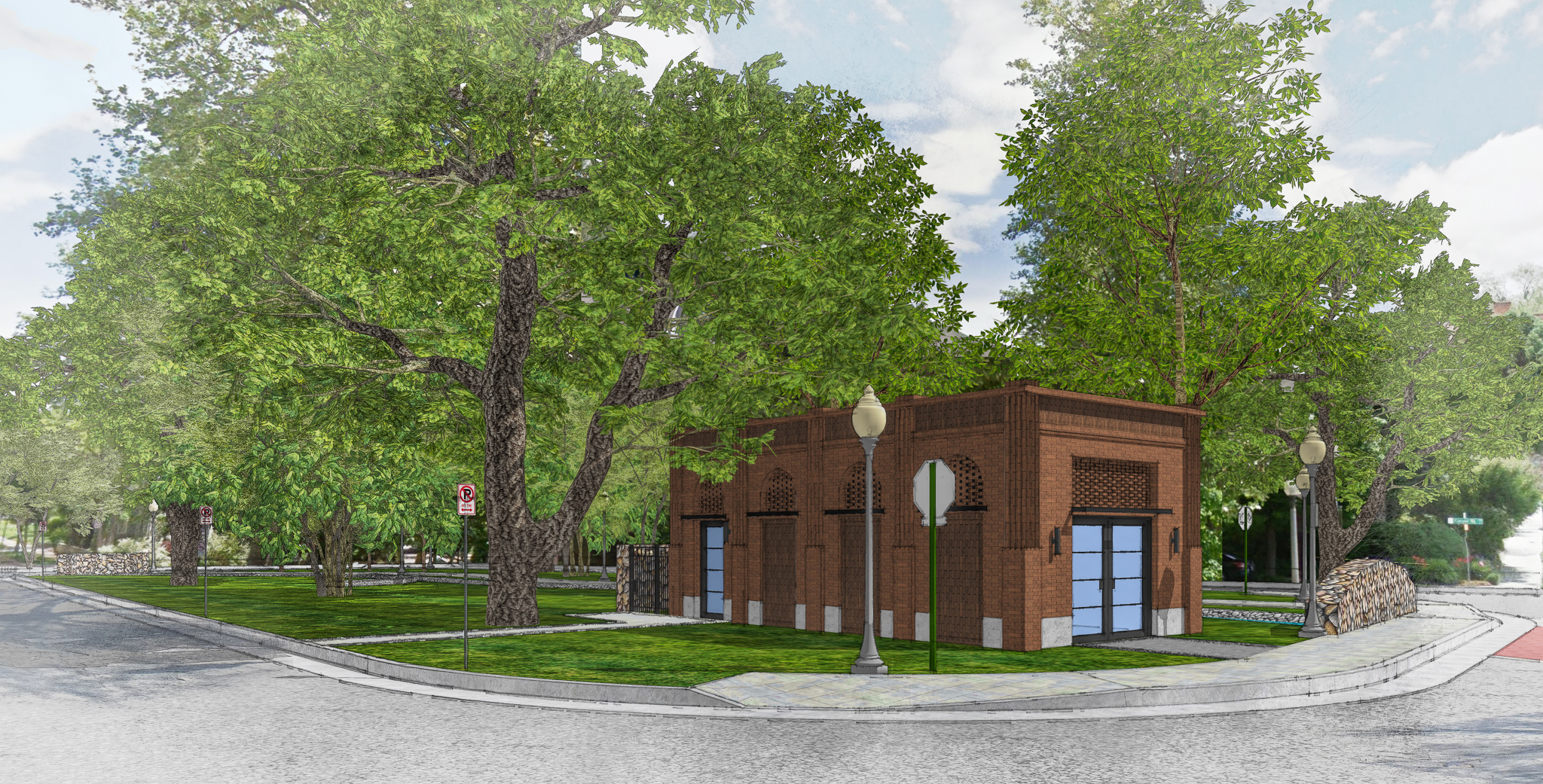 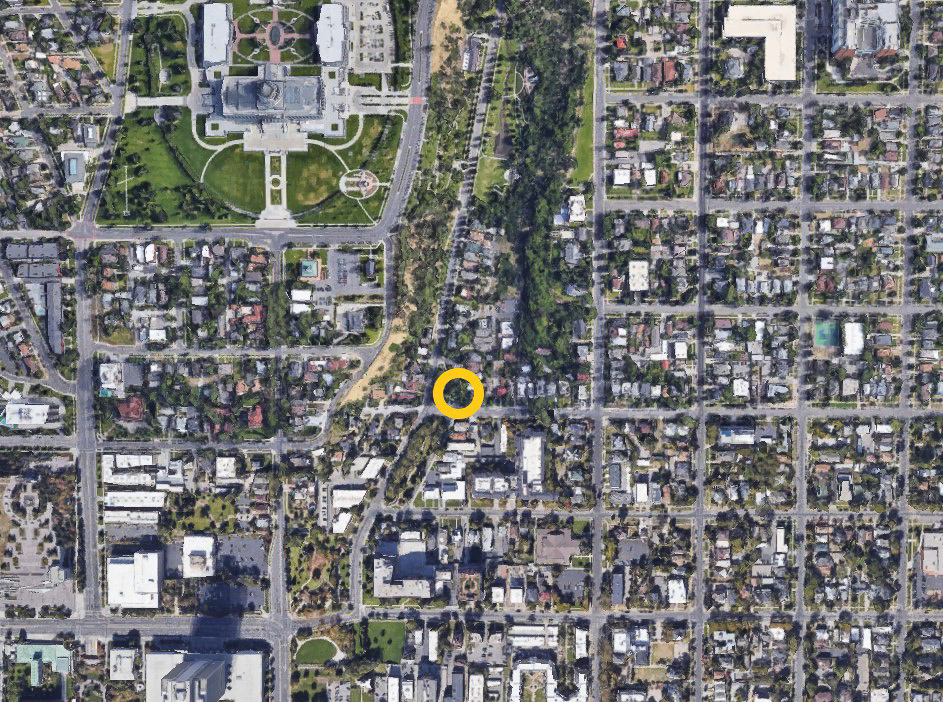 Salt Lake City's 4th Avenue pumphouse met the standards for functionality then surpassed them in a design that reflects the neighborhood's historic character.

What comes to your mind when envisioning a pump house? First, you might ask is it historic or contemporary, as surely the imagery conjures differently. If historic, perhaps it is a small building next to a stream with a wheel turned slowly by water, or a thoughtful Public Works Administration structure that meshes utility with design? More contemporarily speaking, one might see a CMU cube, devoid of architectural style - or worse yet some structure with cheap reference that does little to place itself in a timeline of beauty. Now, consider its setting: perhaps placed in some obscure part of town behind a tall chain linked fence, meant to be ignored, or maybe it’s in a park or city center, where its physical surrounding can’t help but influence its design.

When approached two years ago by a local engineering company to help design a pump house on 4th Ave and Canyon Street in Salt Lake City, CRSA immediately was faced with many of these questions. The well was drilled almost a century ago to provide the city with much of its public water (Graphic 1). The City had recently determined that it was in a state of critical risk, as the systems below grade had started showing signs of failure. SLC Public Utilities decided that operations needed to be moved above ground. This created the need for some sort of envelope to mask and protect the above ground functions, such as the pump, well head and other equipment necessary in extracting water from the aquafer deep below.

In normal circumstances, this task would seem straight forward – design a structure to serve the functions of the well in a utilitarian fashion, without much need for stylistic design and perspective towards the structure’s exterior. However, we quickly understood that this pumphouse needed more. Given its location at the mouth of the popular Memory Grove Park in downtown Salt Lake and its situation within a historically rich area filled with great architecture, natural space and geographical significance, our goal became to merge function with context. Surely a CMU block would meet the needs of the well, but would fail to mesh with this important context.

Arguably one of the largest factors driving the pump house’s design was its location in two Historic Districts: Capitol Hill and the Avenues. New construction in these districts is heavily monitored and reviewed, to eliminate the risk of adding anything to the built environments that detracts from their historic value. This means that the building has to be historical in nature, with healthy references to the surrounding context while at the same time appear to be a product of its time for those who encounter it. The pumphouse could not be entirely contemporary in design, yet a replication of a historic structure would not work either.

The City recognized this balancing act too, giving the design team ample time to come up with an appropriate solution that would 1) satisfy the needs of Public Utilities 2) Create pleasing the neighbors who live in the surrounding area and 3) ultimately meet the requirements of new construction in a historic district.

Our first attempt was a solution that seemed to fit all these requirements (Graphic 2). Although more modern, it brought in natural and historic referencing materials such as brick and stone used in gabion walls. Proportions were similar to that of the surrounding structures, and it was designed to incorporate plants into the façade to highlight the building’s natural setting in the green space it occupies – similar to the well that is located in Liberty Park. Although both the design team and the client believed this solution addressed the issues presented by such a unique situation, nearby residents were not satisfied with the design. For them, it was far too contemporary and stood out in its historical setting.

This presented a new balancing act. On one side, the City had a design solution that met their needs and likely would have passed through the City’s Historic Landmark Commission. On the other side, the residents who had to accept this structure into their neighborhood were not happy. Since public input was more a consideration than a critical barrier, the City decided to hire a public relations firm to help integrate some of the residents’ desires into the final design solution. Utilizing two public input sessions and conversations with the neighbors through email and the PR firm, the team focused on creating a product that would be a solution for everyone.

To begin the sessions, we first identified the parameters we all were working with in designing this pumphouse – as these were our bottom-line constraints.

While these may seem simple and straight forward, it helped immensely to outline our boundaries and use them to help bring the discussion back in range when it drifted outside the lines. It also helped to pull specific language straight from the HLC guidelines so that we were all on the same page. Salt Lake City has an extensive guidebook for work within historic districts, A Preservation Handbook for Historic Residential Properties & Districts. These requirements became the foundations for our charette-style public sessions.

Our first session, held in late February 2020, consisted mainly on the parameters identified in Chapter 12 of the handbook, “New Construction in Historic Districts.” We synthesized the guidelines into four distinct sections:

Using each parameter as a slide in our presentation, we included photos and maps of the surrounding area that residents could use as concrete examples when discussing these items (Graphic 3). For example, when talking about solids and voids, we incorporated a handful of images of the glazing and penetrations seen in the surrounding buildings as precedent. We then asked participants what they felt worked well, and similarly what they believed did not. This dialogue continued through each parameter with extensive note-taking to ensure public input was well documented.

The second portion of the included a charette-style discussion about recent projects that had passed the HLC in both districts. This helped give the participants a perspective on what was feasible in such circumstances, and another opportunity to share what they believe worked well and what did not. This exercise was a bit eye-opening for most participants. Many people were shocked these projects were able to be constructed in such historic neighborhoods. However, each met the HLC guidelines, passed public hearings and were approved. To end the session, we asked residents to submit photos of structures or pumphouses that they liked or would like to see in the planned location on 4th Avenue.

Our second and final public input session took place in March 2020. The meeting took place entirely online as COVID-19 was spreading.  Prior to the meeting, many residents submitted photos of buildings that resonated with them for this scenario. They included photos of the Stairs Plant in Big Cottonwood Canyon, the Fountain of “Ute” at the University of Utah and even photos of historic architecture in Sanpete County. Although this was fantastic inspiration, we now were faced with the dilemma of how to reintroduce this architectural typology and styling in 2020 without creating something that purely mimicked a design popular a century ago.

With this in mind, we presented six different options for public input – three iterations of two designs (Graphic 4). Overall, the six designs made an effort to encapsulate as much of the feedback from the previous session. Once presented, we gave the public the option to give feedback to see which design was best received. We avoided a straight-out vote, as ultimately the decision would be made by Public Utilities. A deliberate effort was made to avoid pitting neighbor against neighbor, or to infer that only a select representation of the neighborhood had made the final decision.

Based on the final round of feedback, CRSA presented a final design which ultimately was very well-received by both the public and the City (Graphics 5,6, 7 + 8). The overall form stems from the utilitarian structure of the stairs plant with its flat roof, toned down detailing and expressive vertical arching. The size of the building was also carefully considered, with every effort taken to minimize its mass. This meant reworking the interior necessities to their smallest footprint.  The flat roof also worked well for this project, as it minimized the height and body of the overall structure – something residents were vocal about. It also gave us the opportunity to hide the roof access hatch, used when drilling the well, by obscuring it behind the short parapet that wraps the roof’s edge. The vertical arching gave undulation to the façade’s surface, blending it with the architecture of the surrounding area along with bringing in additional historic reference.

Brick was used as the primary material given its historic precedent, timeless appearance and durability. In an effort to place the structure as a product of its own time, we contemporized the brick’s use through the way it was laid. Traditional screens used for venting were reinvented in a brick lattice, where the surface undulates in protrusion as well as switching between light and dark colors. Eight pilasters break up the facade into distinct segments. Here, we saw-toothed the brick application to reference the fluting of traditional columns, but again in a modern application. Both designs of brick-lay additionally create texture and light patterning that helps maintain the quality of craft that is seen in the park and surrounding area. Much of the contextual design is artistic and/or decorative, as Memory Grove features many historic monuments, civic buildings and residences. All of the darker brick is played in a vertical bond to differentiate it from the majority tab brick as well as introduce another contemporary tactic. Lastly, in between each pilaster and under each screened segment is either a glazed door or a reference to one in the darker vertical brick.

Although a pump house, we felt strongly that the structure needed glazing and reference to openings in effort to blend with the surrounding architecture. A simple structure with one opening would surely stand out. We chose to glaze the doors in an opaque acoustical glazing in order to have the capacity for some light to be emitted at night, in addition to bringing in light when the building is occupied. This did, however, bring up questions of sound leakage. Similar to the great effort to create sound blocking wall systems, the doors were carefully selected with sound retention as the paramount consideration. Glazing would not need to be sacrificed, as evidenced by most airport where window glazing proves to block out the sound of jet engine activity outdoors. To be extra certain of their sound retention capabilities, we also introduced two measures as additional barriers. For the main double doors facing 4th Avenue, we installed an acoustic coiling door behind to act as an additional guard against sound leakage. As for the door on the west facade, we moved it to the chlorination room so that there would be two walls, the exterior and an interior partition between the chlorination and pump rooms, between the sound emitter and outside.

Clearly, this pumphouse is not your typical pumphouse. Its design came with many hurdles and new challenges we did not expect from the get-go. Yet, it was these challenges that facilitated what we believe is a much more successful design. While public engagement and rich historic context are not often at play, especially in utilitarian architecture, these parameters often prove to only enrich the design. Sometimes, CMU cubes are the right thing for the right place.  For this effort, we needed something special.