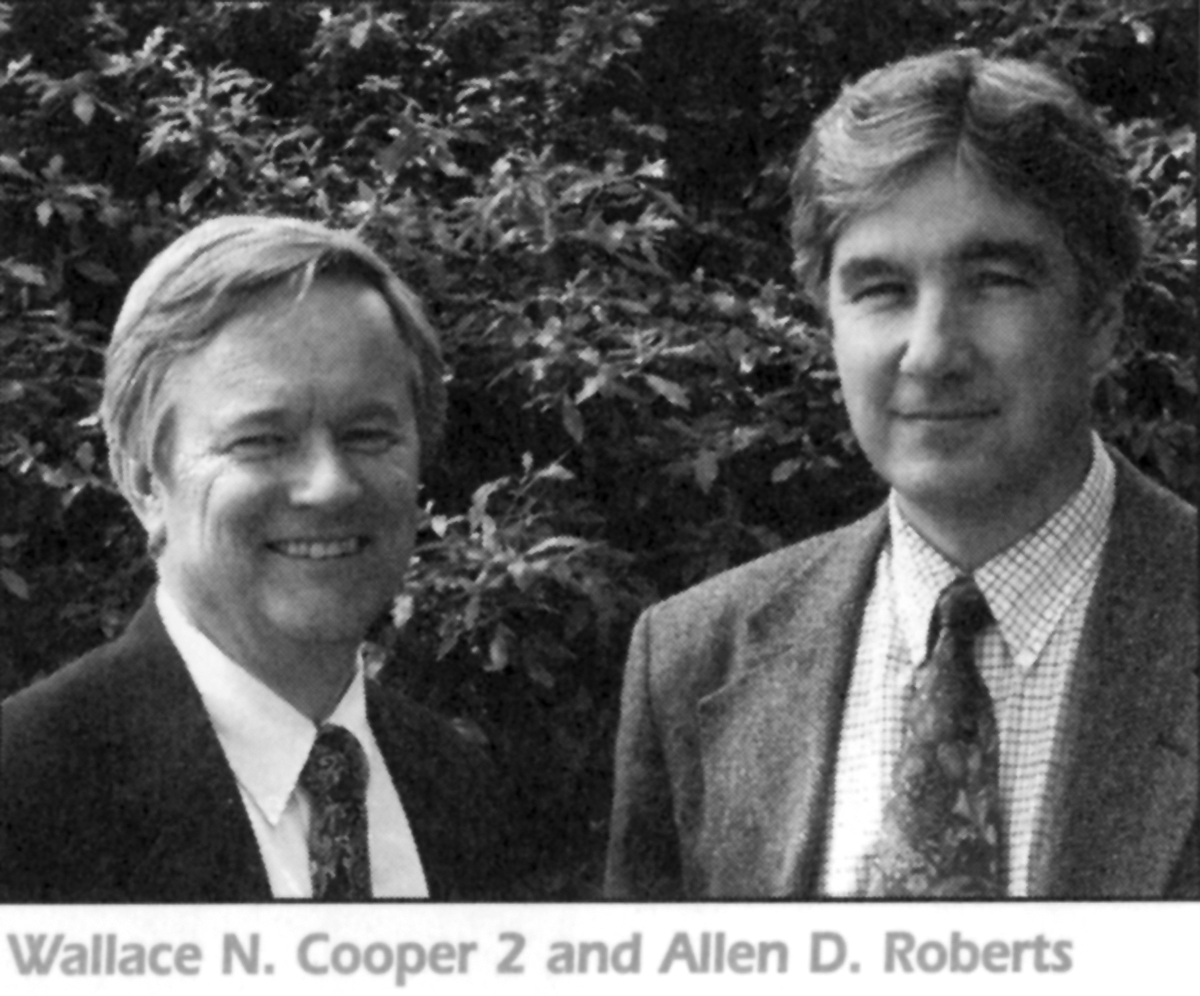 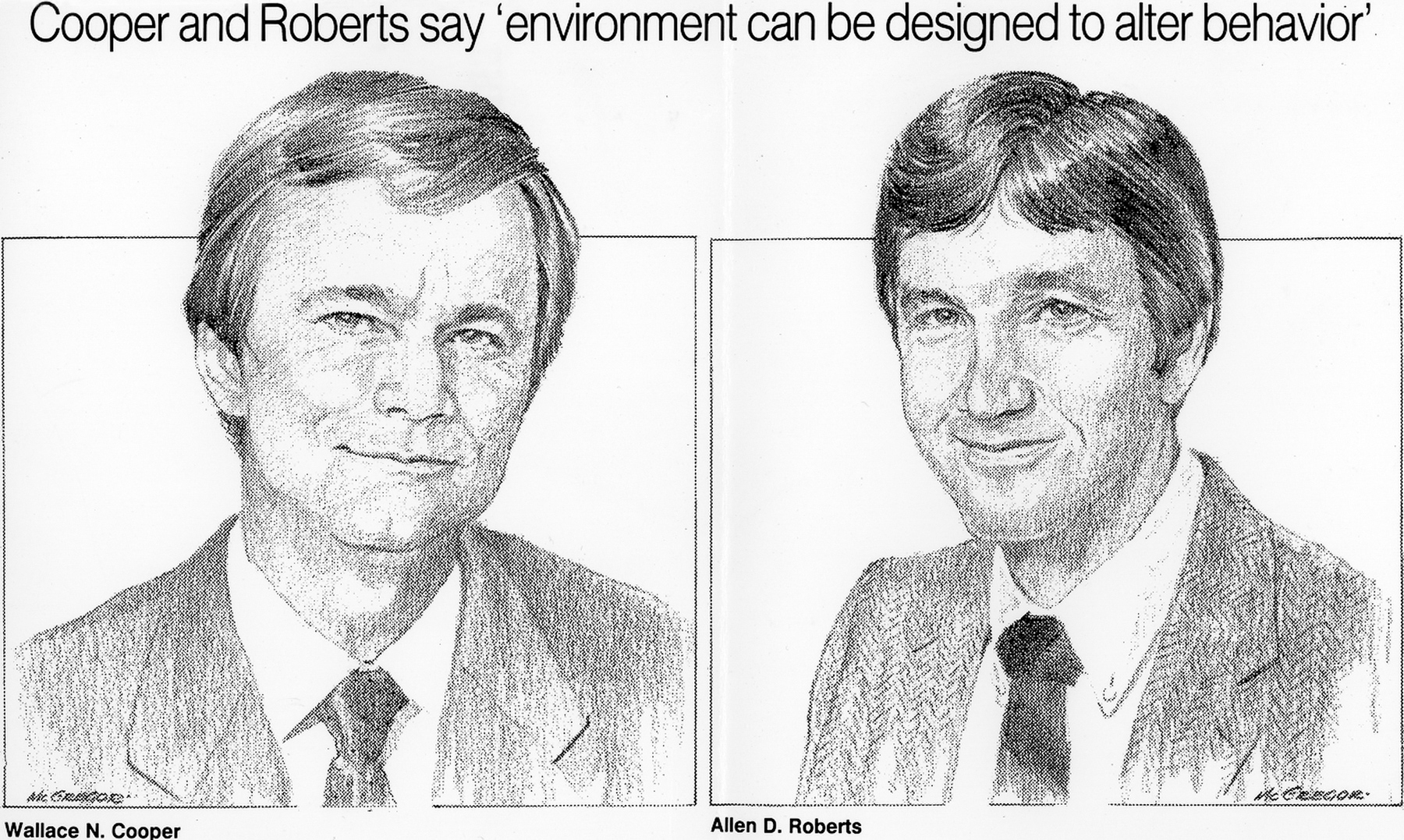 Wally is legendary for his architectural know-how, way with people, and good-deed doing. Allen is known as a scholar, an artist, and well-published architectural historian.

CRSA's founders are now emeritus members of the firm. They have passed on the challenging job of running the business to their successors and are now concentrating on their energetic pastimes.   Wally has designed and is single-handedly completing the construction of an addition to his Idaho farmhouse.  Allen is putting the finishing touches on two books he is writing (Richard K.A. Kletting, and Brigham's Architects), and working at the art galleries he co-owns.  From time to time they both provide architectural services for friends and good causes.

They are now gentleman architects, well-respected preservationists with legacies throughout the Intermountain West, and known as the founders of a 45-year old, stable, and multi-faceted architectural firm with two offices in Utah.  Wally is legendary for his architectural know-how, way with people, and good-deed doing.  Allen is known as a scholar, an artist, and well-published architectural historian.

In 1975, they were enthusiasts ready to make a leap of faith.

Wallace Cooper knew he wanted to be an architect in seventh grade. He grew up on the west side of Salt Lake City in Rose Park, the son of a dry cleaner and his wife.  After he graduated from West High School, Wally received a scholarship to the University of Utah.  While studying psychology, Wally supported himself by working in architecture offices, and bagging, stocking, and cashiering in grocery stores.  When he entered the Master of Architecture program, he thought he would be a pioneer in the emerging movement called architectural psychology, a field that explored humans' relationships to their spaces.

After graduation in 1971, Wally and wife Martha joined the Peace Corps and were assigned to Tunisia, where Wally worked with City Planners and architectural students. Upon their return to Salt Lake City, Wally got a job with Architect Stephen Baird. The Coopers had their first child and were staying with Martha's family while looking for their first home. Baird owned a house built in 1857, in the Marmalade District. It was abandoned, and he was considering using it as an office. One day, Baird sent Wally to secure the windows. Wally came home and told Martha, "I found our house."

The house was a disaster, and their families thought they were nuts to buy it and attempt to make it livable. But, as Martha said, "We were Peace Corps volunteers, we could do anything."

It was this house that redirected Wally's career from architectural psychology to architectural preservation. Wally had to figure everything out, and he had to do it all by himself–design the remodel, act as general contractor, and swing the hammer. Wally, Martha and their little baby moved into one room of the house with an electric frying pan and a popcorn popper and began to pick their way at it. They still live in the house.

Allen Roberts was born in Milwaukee, Wisconsin, to Lorell (Lee) and Pauline Roberts. Allen comes from a deep building and crafts tradition. Both his father and grandfather were building contractors and carpenters–a trade he also practiced before becoming and architect. He was raised and schooled in Milwaukee and San Francisco before moving to Utah, where he attended Brigham Young University and the University of Utah.  Allen was married in Utah and helped his former wife, Dawn, raise their five children.

Early in his career, he worked for three architectural firms before becoming the Historical Architect for the Utah State Historical Society's Preservation Office (SHPO). There he prepared more than 100 successful National Register nominations for individual buildings and historic districts, helping owners to eventually restore many of these buildings. Later, with CRSA, he completed more than 25 successful Historic Building Tax Credit restoration projects, often for buildings that had been registered decades earlier.

Simultaneously, Allen began a long publishing, editing, and writing career with several publishers of books, journals and magazines. Since 1975, he has authored or coauthored eight published books (one a best-seller and Pulitzer Prize nominee) and several award-winning articles on Utah history, architectural history, historic preservation and social issues.

Moving into the Marmalade neighborhood was the turning point in Wally's life and career. Working on the house project made Wally's architectural education practical. He learned how buildings are put together. These experiences gave him confidence to start his own practice. He went out on his own in 1975. He set up a drawing table on sawhorses at home and got his first contract:  the Perry Theater in Perry, Utah. His second project was a small job at Wheeler Farm, which turned into several more for the same client. He moved into a second floor office at the Guthrie Bicycle shop. The rent was $30 a month, and some months he didn't know if he would make that.

In 1976, Wally met Allen Roberts, the then architectural historian for the State of Utah, and the two young men started working together. They steadily amassed a reputation for authentic restoration and won some prestigious contracts:  the Miner's Hospital in Park City, Ancestor Square in St George, and the Knight Block Remodel in Provo. They were the first firm in the region to dedicate itself to historic architecture–and were very credible experts as they brought both academic historic background and practical remodeling know-how.

Tangibly supporting what they believe in, the pair have owned and restored twelve historic buildings (4 in Sanpete County, 5 in Ogden, 2 in Salt Lake City, and 1 in Spanish Fork). Upon discovering the then dilapidated but visually intriguing, Victorian 25th Street in Ogden, Allen was the catalyst for its development and eventual success as a vital historic commercial district. Similarly, he joined with Craig Call in creating the Chesterfield Foundation, which purchased a pioneer Idaho town and implemented a program to preserve its 40 historic structures.

Since Wally's humble start in offices out of his home, the firm moved its operation into successively larger historic buildings in Salt Lake City. After the Guthrie Building, they had offices on Exchange Square, then at the former Bud Bailey offices at 244 West 300 North. They then bought and renovated the Heystack Grocery at 202 West 300 South, and in 1996 Wally and Martha sold all their other properties (except the house) to buy the 24th Ward Chapel on the corner of 700 North and 200 West. Cooper/Roberts was the primary tenant for the next decade.

Meanwhile, Allen continue to write, teach, lecture and serve on the boards of directors, often as chairman, of historic preservation and non-profit organizations including Cornerstone, the National Trust for Historic Preservation Advisory Board, This is the Place State Park Advisory Board, Park City Landmarks Commission, and the Spring City and Sanpete County Preservation Commission,  the Leonardo (Museum) Foundation, Center for Documentary Arts and Salt Lake Arts Center.

Prior to 2000, the firm dabbled in new construction–some housing, cultural, civic and religious facilities.  In 2000, the firm added a partner, was renamed Cooper Roberts Simonsen Architects and expanded its services from architecture and interiors to include community planning and landscape design.  Using historic buildings as an entree, CRSA began to pursue more new construction on college and university campuses, municipalities, and private enterprise.  They also explored "green preservation," marrying historic preservation design with sustainable, high-performance, LEED-certified design in such projects as the Scowcroft/GSA Building renovation in Ogden, which won seven national, regional and local awards for project excellence.

By 2009, the firm legally became CRSA, and moved to its South Temple offices*, for the first time inhabiting a building less than 50 years old. Over the next ten years, the firm grew, matured in the practices of Higher Education, Federal Government Work, and blossomed in civic, cultural work, retaining a secure tie to its preservation roots.  As Wally prepared a new generation for leadership and strengthened ties with blue chip clients, Allen nurtured new client relationships.

By the time they retired in March of 2018, CRSA had been the recipient of or associated with over 90 awards for project design excellence, as well as firm and business practice distinction, including two national awards from the National Trust for Historic Preservation, most recently for the Art Deco Ogden High School Renovation.  Preservation Utah has bestowed the firm over 40 awards for individual projects, and to Wally and Allen the prestigious Lucybeth Rampton Lifetime Achievement Award.

In 2018, as they pulled back from their company, CRSA celebrated the work of Wally Cooper and Allen Roberts. The celebration included a video of interviews with colleagues, family and clients in Make No Small Plans.

*Since their retirement, CRSA has moved into yet another historic property, the Walker Center in Downtown Salt Lake City.